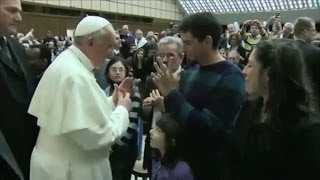 The Pope meets blind and deaf people in the Paul VI Hall. Father Delci da Conceição Filho opens the meeting: "Good morning, everybody. We are all gathered here. I am father Delci of the Little Mission of the Deaf-mute. I am very happy because you answered this call. On December 26th, 2013, father Alessandri, a friend of mine, came to announced he went to the Pope. I asked him if he could bring a letter to Pope Francis. Many deaf people ask to meet the Pope. He was very kind and promised he would have given the letter to the Pope. This is how this meeting started. On December 30th, 2013, father Sapienza called me and announced me the Pope had read the letter and accepted the audience we had asked. One month later another communication announced that this audience wuld have taken place on March 29th, 2014. Form that moment on I can only thank everybody for having welcomed such invitation. Thank you all for coming. This is a very positive response of the Church to all of us. Without saying too many words, I can only thank each of you for your engagement. Thank you all. Here there are no differences, institutes, associations. We are all brothers and sisters. We have come here to meet a great Shepherd. Thanks for this, too. The other great news I received at that moment concerning the organization was that we would be together with the Apostolic Movement for the Blind. I said it was possible to be together, because we are all people coming to meeth the Shepherd as little sheep that go to their shepherd. It is good to have you together with us and to be here with you in this moment of grace for everybody. Thanks to the Apostolic Movement for the Blind as well. Now I go the other side of the Hall and we start what was scheduled. Thank you all." 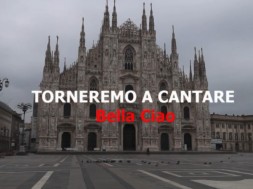 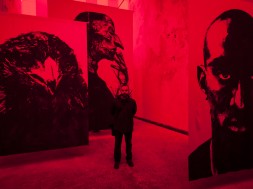