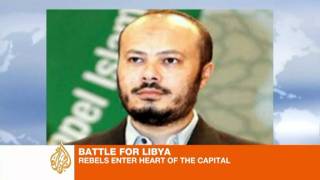 Thousands of opposition fighters are streaming into the capital Tripoli, they have taken over the city's Green Square and vowed to rename it Martyrs' square. The square has been the scene of huge pro-Gaddafi protests, so the scenes of people celebrating are particularly symbolic. The rebels say one of Muammar Gaddafi's sons, Saif Al Islam, has been captured, and another, Mohammed, is under arrest. Al Jazeera's Sonia Gallego reports.