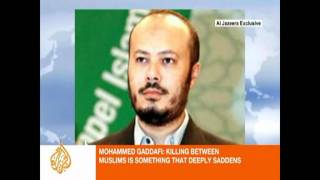 Two of Muammar Gaddafi's sons are now in the custody of Libyan rebels. Earlier Al Jazeera spoke to Mohammad Gaddafi, after he had surrendered. There was the sound of gunfire before the phone line went down. But the head of the opposition National Transitional Council told Al Jazeera he was not hurt.